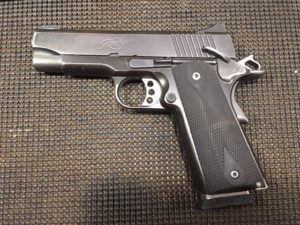 This article will tell and show you all you need to know about the Kimber Pro Carry 2 disassembly and take down procedure for cleaning purposes, or to replace the recoil spring. The method also works for all Kimber Pro models and Ultra Series pistols.

The Kimber Pro Carry II is a 1911 with a 4″ “bull” barrel. The bull barrel is a different design form a standard 1911 in that it does not use a barrel bushing to hold it firmly in the slide. 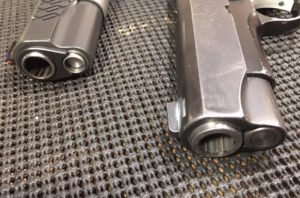 The following Kimber models all disassemble the same way:

The guide rod and recoil spring assembly is a little different on the Kimber Ultra pistols, but the disassembly steps are the same. The recoil spring is a bit tighter and slightly harder to work with, but you will be able to get it done.

If you have a full size 5″ barrel with a barrel bushing at the muzzle, there is a different procedure for taking it apart. See my tutorial here:

How to Disassemble a Kimber 1911- 5″ Barrel Custom Models

There is only one tool you will need to field strip this 1911. It is called a “take down” tool and it is basically a bent piece of steel resembling a small allen key. If you do not have one, a paper clip will work, but be sure you bend it the same way as the tool so it fits properly. I do recommend getting the tool Kimber Take Down Tool Here if you don’t have it.

Update: I have noticed that repeated use of the Kimber Take-down tool causes some marking on the end of the guide rod. Here is a picture of my Pro Carry. 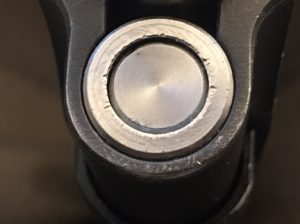 My gun has seen better days, but if it was new, this would bother me. If you want to avoid this, there is a tool that slips over the end of the guide rod and does not damage anything. It will be used at Step 4 below. It makes the process much easier as well. I will be modifying the pictures soon to include this tool in the instructions. In the meantime, you can check it out here:

Below these steps I have included pictures so you cannot possibly do this wrong!

Here are pictures of each step, and if you scroll down, I have added a video as well. 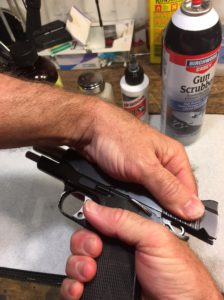 Unload the Chamber and double Check that it is Unloaded 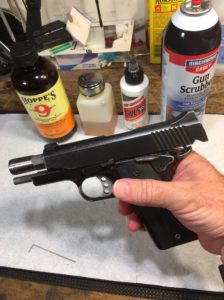 Lock the Slide to the Rear 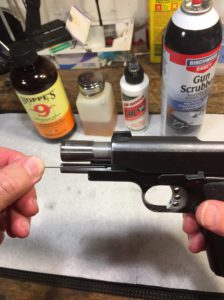 Insert take-down pin into the hole in the Guide Rod. 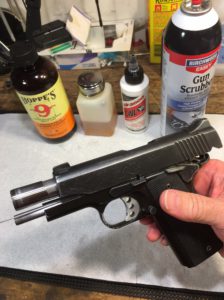 Release slide lock and let slide move forward and stop at the Take Down Tool. 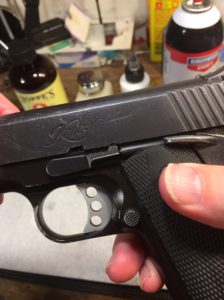 Line up Notch in Slide with the end of the Slide Lock Lever. 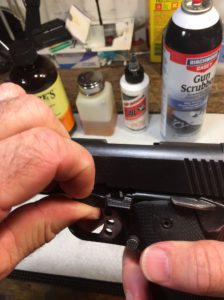 Push the Slide Lock Lever from the Opposite Side of the Gun and pull it out the Front.

Pull the Slide off the Front of the Gun Frame. 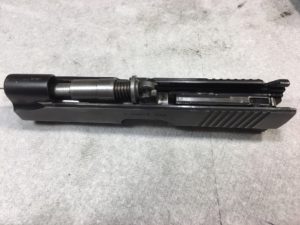 Place the Slide Upside Down and Remove the Guide Rod, Recoil Spring and Barrel. 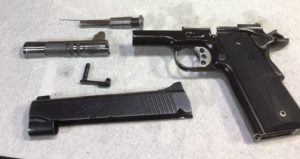 I have added a video here to show you exactly how to disassemble the Pro Carry II 1911.

You have now successfully performed the disassembly of a Kimber Pro Carry II or Ultra Carry 1911 pistol. Please leave a question, comment or suggestion below!

If you carry a concealed weapon for self defense, have you thought about what happens AFTER you need to use deadly force to defend yourself or others? Who do you call? What do you say to the police? What DON’T you say to the police? Please read my article on Concealed Carry Insurance Coverage and Legal Protection.

See my tutorial on Cleaning a Kimber 1911.

My name is Dave and I have been carrying concealed daily for over 15 years and have extensive Defensive Handgun training and Practical Rifle training. I am a Distinguished Graduate of Front Sight's 4-Day Defensive Handgun course and am trained in Advanced and Tactical Handgun techniques.
Website