These are the rules. You MUST abide by these at ALL TIMES to avoid accidents that may cause damage to property, injury or DEATH. I added one that I believe is overlooked for those of you that train drawing from the holster. That means there are 5 gun safety rules!

It is all too common that we hear of people getting seriously injured or killed due to a momentary lapse in judgement on the part of the injured party or someone else.

Every single gun related “accident” is due to someone breaking one or more of the following four rules of gun safety!!!

Now I will cover each gun safety rule in detail so you understand why it is important and exactly what it means.

Rule #1: The Gun is Always Loaded 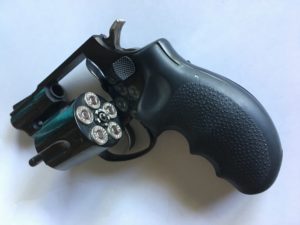 Is the gun really ALWAYS loaded? Of course not.

There are times when the gun is actually unloaded and completely incapable of firing a round.

The purpose of this Number 1 Rule is to get in the habit of handling every gun as if it was loaded, that way you will always treat the gun in a safe manner, loaded or not. There will be times that you do not know if a gun is loaded:

You are better off treating it as if it was loaded than taking a chance.

Rule #2: Never point the gun at anything you do not want to destroy

This means NEVER, EVER. Period. Can you imagine how many people would still be alive today if their friend, brother, sister, wife, husband, etc, NEVER pointed that gun at them?

Even if all the other rules are thrown out the window, if the gun was never pointed at a person to begin with, it could “go off” all day long and never hurt anyone (well, except for maybe their hearing!) I actually think this rule should be number One.

True story: I had a negligent discharge myself a couple years back, and I thank God I was pointing the gun in a safe direction when it happened. My family was just 15 feet away in the other room when I thought I was releasing the cocked striker on an empty chamber. I squeezed that trigger and BOOM! Not the “click” I was expecting.

I put a hole in the office floor, and the 3/4″ water main in the basement, and the door to the storage room downstairs instead of a family member! This is the main reason I am so adamant about gun safety rules to this day.

Rule #3: Keep your finger away from the trigger until the gun is on target and you are ready to shoot. 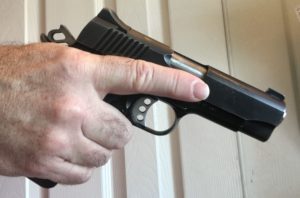 Gun Safety Rule #3. Finger off the trigger until on target.

A gun cannot fire without something pressing the trigger. That “something” is almost always a finger. Conversely, when a finger is on a trigger, the chances of that gun firing, intended or not, are extremely high!

One of the first things you are taught at a gun training class is to keep your finger off the trigger and outside the trigger guard at ALL times until the gun is aimed at a safe target and you are ready to fire.

Guns DO NOT just “go off”. They are designed to shoot when the trigger is pressed. A gun only fires when someone or something puts pressure on the trigger.

Yes, a gun is a mechanical device, it is possible that a mechanical defect could cause a gun to fire when nothing is actually touching the trigger, but instances of this happening are exceedingly rare. Here is an article called “Do Guns Accidentally Go Off?”

Rule #4: Always know what is in line with the target (in front and behind) before you shoot.

This means you need to know what, or who, is behind your target, or maybe is about to cross in front of your gun. Most target ranges are set up with a safe backstop, so your bullets are safely stopped after penetrating your target.

However, if you need to shoot a bad guy in your house, you need to know where that bullet is going to go if you miss, or if it passes completely through the bad guy and continues through the house. Most handgun rounds will penetrate several interior walls with ease and remain deadly after doing so.

Be prepared to change angles or move in such a way that an errant round will wind up safely stopping in the ground or against a brick wall!

Rule #5: Always re-holster your gun SLOWLY with your finger straight.

When you are training and practicing drawing and shooting fast, you tend to get into a “move fast” mode. DO NOT allow yourself to re-holster your gun quickly! There will never be a situation where you need to put your gun away fast!

If you go fast and your finger, or part of your shirt that came untucked gets into the trigger guard as you are jamming the gun into your new Blade-Tech OWB Kydex Holster, you will most definitely be heading to the trauma unit with a large hole through your firing side leg!

It happened in the range next to mine when I was at a Firearms Training Institute. The guy was holstering his .45 too fast, and is finger got into the trigger guard and he ended up on a helicopter ride to the hospital. Re holster SLOWLY!

There you have it. If you follow these Four rules of Gun Safety (and Rule #5) ALL the time, you will never have a situation that you will regret.